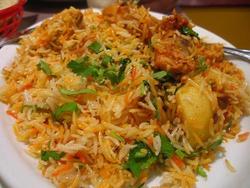 History and Evolution of Biryani

Biryani is a very popular rice based meat dish from India and it is an integral meal of the South Asia. It is believed that the biryani was brought in for first time in kitchen of the Mughals. Hyderabad, Delhi, Agra, Kashmir, Dhaka, Malabar, Kolkata, Lahore and Lucknow are the main areas where you biryani was evolved. Let’s trace the history of Biryani in this article. You can find more information about Biryani, at Biryani King Website.

What is the Biryani?

Biryani is the mixture of rice and meat that is fried before cooking. In Parsee birian means to fry before cooking, hence the name. Previously, the rice was fried in clarified butter what we call it as ghee, without washing it. Reason behind doing so was, by frying rice in ghee, acquired nutty flavor and second thing is, frying of rice burnt the starch in it resulting in gelatinizing the outer layer. After that the rice was boiled with spices till it gets half cooked. The leg of Telengana goat is preferred in the biryani. It is marinated with mixture of curd, papaya, and spices and then it is cooked.

After cooking the two ingredients separately, they are cooked together in an earthen pot i.e. Handi. Then after, meat and rice are layered in the Handi. Always bottom and top layers are of rice and middle layer contains meat. Some condiments like saffron, mace, screwpine and rose essence or rose water and cardamom are added while layering of biryani. All these condiments give the flowery sweet aroma to the dish. Then this Handi is sealed and placed on the live coal for cooking. The Calicut Biryani is cooked on the embers made up of coconut shells. The seal of Handi is broken only when it is to be served.

The word "biryani" has been derived from Parsee word 'Birian'. Birian means to fry the food before cooking. There is a traditional method to cook biryani- Dum. It is like special style of cooking biryani. You can say that, according to  the cooking style and name of dish it has been originated in Arabia and / or Persia. The biryani has traveled most of the countries from Persia to North India via Afganistan. It is said that biryani have been brought to Calicut via Arabian Sea by the Arab traders.

History of biryani that we know better is from 1800 to 1900. Lucknow was named as Awadh when the Mughal emperors were ruling our country. The Awadh introduced the Awadhi Biryani. Similarly, in 1856, Nawab Wajid Ali Shah was deposed in Culcutta, that given rise to Culcutta biryani. Aurangzeb placed the Asfa Jahi in position of Nizam-ul-mulk- the ruler of the Hyderabad. The move introduced the world famous Hyderabadi Biryani. Also he placed the Asfa Jahi as the 'Nawab of Acrot' to rule Aaru Kaadu region of Hyderabad- the six forests in Hyderabad. This introduced the Acrot Biryani. Tipu Sultan of Karnataka spread the biryani to Mysore. There is no need to say that the biryani was a royal dish of Nizams and Nawabs. They hired the Hindu vegetarians as book keepers that lead to the discovary of Tahiri Biryani.

There are many legends regarding with history of the biryani. One legend says that, the Taimur Lang brought the biryani to Northern India from Kazakhstan through Afganistan. Another legend says that Begam Mumtaj Mahal-the beauty sleeping in Taj Mahal prepared the biryani as a Complete Meal for the army. Some say that, the dish was introduced in West Asia. It is said that, the migrants were used to bury the earthen filled with rice, meat in a pit with spices. After some time the pot was brought out from the pit and the dish was the Biryani.